PENTA 720 is a new generation of audio router and audio distribution interfaces from NTP Technology, which provides a versatile and flexible interface for signal distribution of analogue and digital audio via AES/EBU, MADI, SDI SD/HD/3G embedded audio as well as routing via IP Gigabit Ethernet and optical fibre networks.

PENTA 720 is a 2U modular audio interface designed for use in television or radio studios, outside broadcast vehicles and public-event venues. It comes with eight channel AES3 input/output channels, MADI and two IP Audio Ethernet in/outs.

Get the Complete Overview of the Optional I/O Cards Available for Penta 720...

PENTA 720 include a 1024x1024 multiplexer,enabling all analogue and digital inputs and outputs to be routed in any combination; this enables the unit to also split signals for advanced signal distribution. The multiplexer can be used to establish the static connections of the signal inputs and outputs, and furthermore it incorporates soft switching with a fade down and fade up functionality of the signal level. Soft switching ensures that setting or changing a signal path can be made without any audible click or artefact.

Dante is the ultimate choice for High Reliability and High Performance Audio Routing and Audio Processing. Small in size, but big in performance. The all digital Penta 720 is developed with the newest technology in FPGA, SMD and software design. Featuring single or dual processor. Ultra compact, ultra fast, ultra reliable. Reliability, innovation and years of experience.

PENTA 720 are TCP/IP controlled via one or two Ethernet ports. Control and supervision can be made by the NTP RCCore control system, and the operation is done via the NTP VMC control software client applications. A simple dedicated software control application for Windows is available for controlling and setting up PENTA 720 on a unit to unit basis when less advanced operation is required.

The combined Penta Universe of audio router and converters is highly modular. The Penta 720 is modular in itself with its eight expansion slots, but you can also mix and match several Penta 720 units and the Penta 721s, Penta 721s-DNT and Penta 721s-SDIas you see fit, which makes it possible to tailor the system to become the audio backbone for virtually any pro audio application. Please see the examples in these videos:

For more details on getting started with the Penta 720 base unit, please download this Installation Guide... 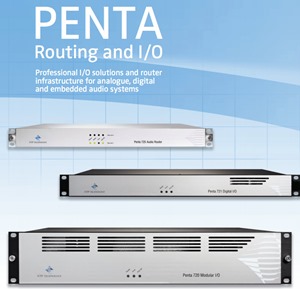 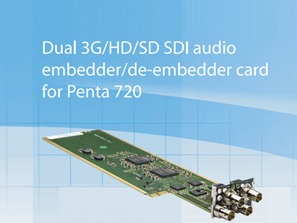