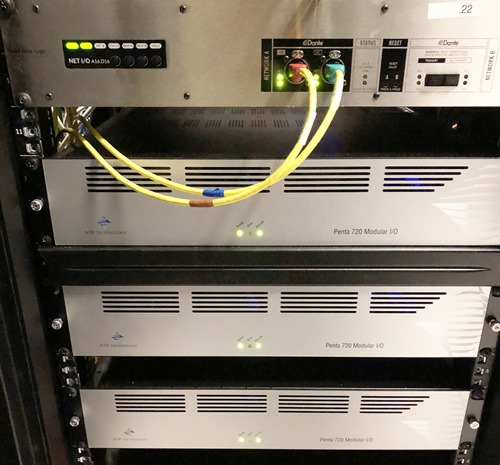 The need for bridging the gap between various audio formats is becoming increasingly important, as many broadcasters are in a transition phase where AoIP is being introduced and has to co-exist with formats like SDI, MADI and AES.

In this case, the NTP Penta 720 units are exclusively handling SDI/Dante bridging. Two of the frames have 7 SDI cards installed and one frame has 4 SDI cards with both inputs and loop outs used.

Currently, the task is simply de-embedding router and video player sources into Dante for SSL audio consoles and using the video loop out to two Ross video switchers. But there are plans in the future to work on using the embedding option for certain audio and video sources.

The Penta 720 units along with the 18 SDI expansion cards were sold in by Diversified. Kevin Garguilo, Director of Strategic Accounts, Media and Entertainment, commented:

"Price was a determining factor due to the 720 series targeted feature set of the product line; the customer was not paying for extra unused or not-needed features. Further, other key determining factors included the loop through outputs and the versatility to embed or de-embed."

Learn More About the Penta Universe of Audio Routers/Converters and Controllers...