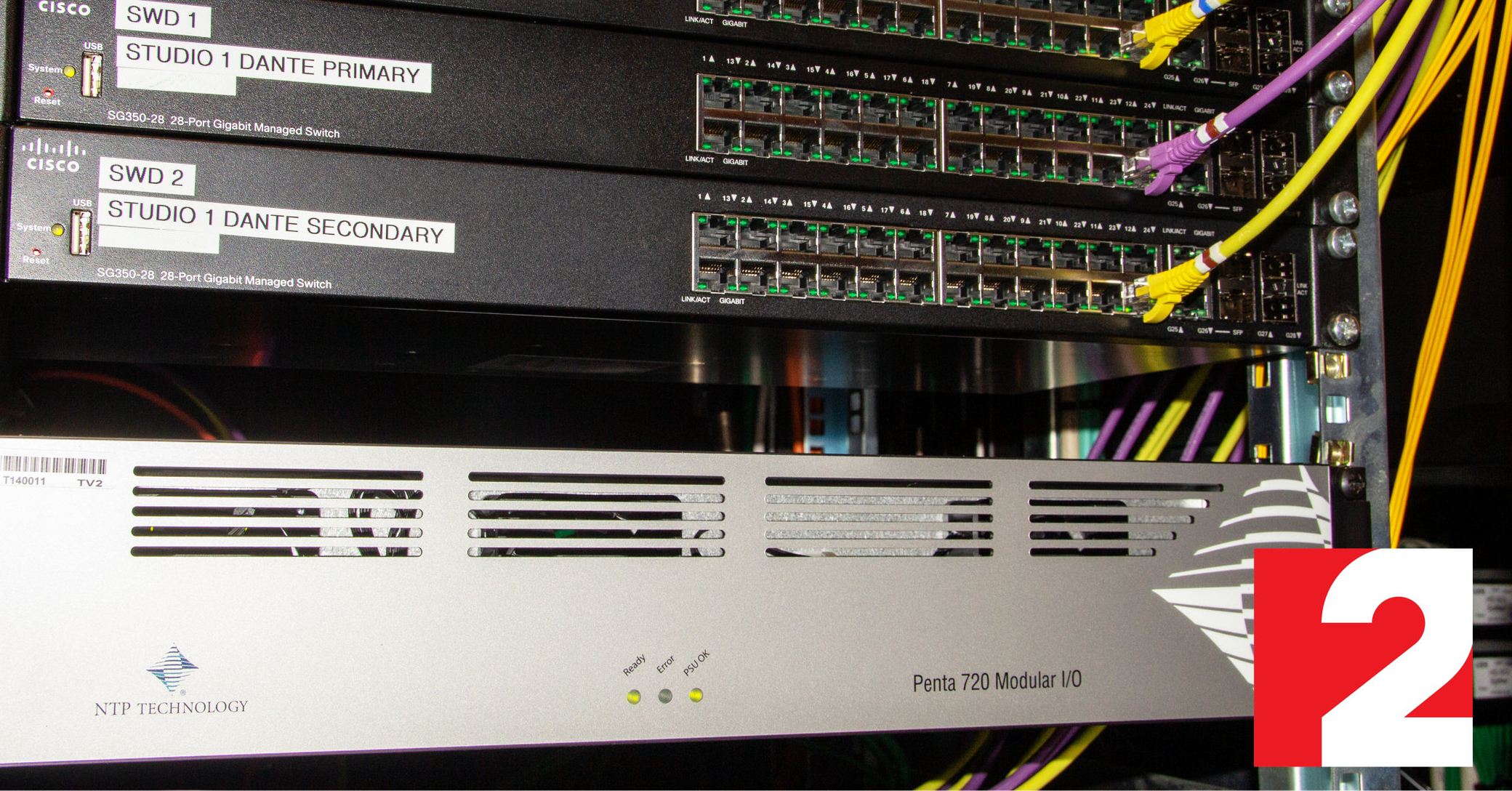 Hungarian broadcaster TV2 bridges the audio-routing gaps between several Dante IP Audio networks that was previously separated by installing a Penta 720 with seven Dante Cards and one MADI card as its audio-routing centerpiece.

TV2 is one of the largest commercial TV stations in Hungary, operating more than 15 channels, which includes entertainment, news, sport, cooking and many other different channels. To support all these various needs, they have six broadcast studios, tailored for the specific needs that each type of content requires. 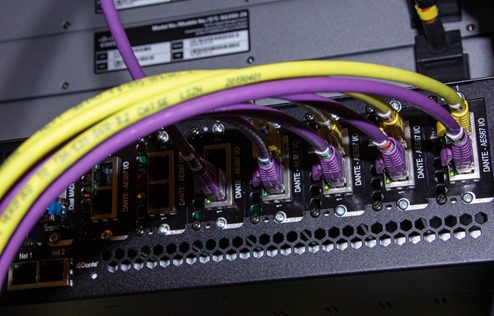 These studios are set up with large Dante AoIP networks as the audio backbone. Until now, all of these networks were handled as separate entities, but during a recent station-wide intercom replacement project it became necessary to implement  interoperability between these 'islands' in order to transmit audio back and forth.

Further, due to many parallel live events (including primetime shows and sport events) a maximum level of redundancy, safety and security had the highest priority. Of course, the ability to transmit audio between the previously separated audio networks would also improve the overall flexibility significantly.

During the planning process, many possible solutions were evaluated. It was decided to take a very logic approach with the goal to ultimately merge all of the networks into a single one through the IT-method, keeping the separated segments and subnets intact, making L3 routing between them possible. 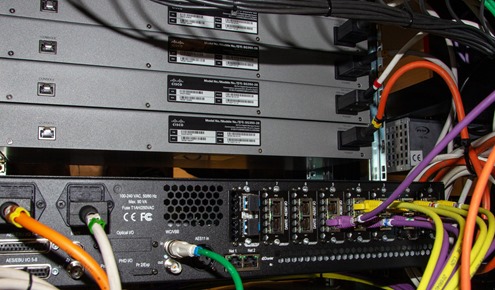 All of these solutions were evaluated as they would affect the overall reliability of the system in a negative way. At the end of the day, StudioTech proposed a solution to TV2 that involved implementing a central routing device - an NTP Technology Penta 720 audio router and format converter.

The Penta 720 is fed 128 audio channels from each Dante network segment via a Dante expansion card with onboard Sample Rate Conversion. With this solution, it was easy also to include two MADI-based studios into the central audio routing systems via a dedicated MADI expansion card.

"Ultimately, the Penta 720 frame gives us a complete solution, which helped keeping all of the already-existing networks 'as is', with their own digital clocks, subnets and IP ranges, but while providing very easy and flexible audio routing from everywhere to everywhere. It’s also very nice that the frame is easy to adapt to any router management system over SW-P-08. 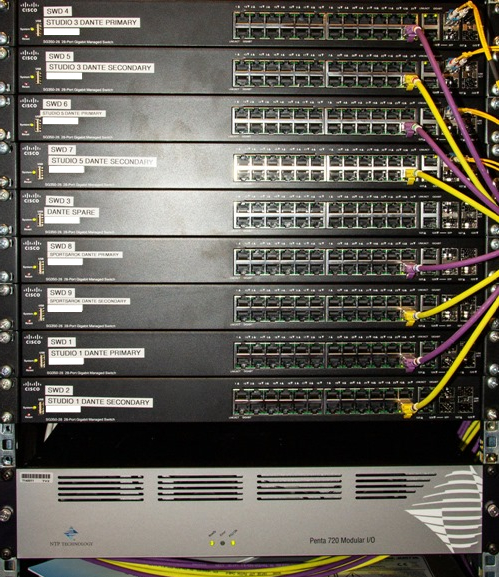 This kind of separation also offers the possibility to provide secure network segments toward the general IT backbone - and if necessary pull a Dante stream from anywhere in the building without compromising the broadcast audio network," says StudioTech's Máté Kovacs, who consulted and took part of installing the new IP Audio infrastructure, revolving around the Penta 720 with seven Dante and one MADI expansion cards.

As can be seen, there are quite a few empty switch ports above the Penta 720. The reason is that TV2 decided to keep networking as simple as possible, so instead of one fiber based switch with many VLAN’s, they installed a dedicated switch for each network segment at the core location (both primary and secondary), which eliminates the need for switch configuration (no VLANS’s).

Further, this structure also means that it is not necessary to keep two types of switches as spares - just one - and should replacement be required, it is really easy. Simply remove the faulty unit and plug in another, and the system is operational again.

And as a side-effect, a lot of free ports are available on each of the network segments for adding additional Dante devices if necessary. For example, TV2 can now go with Dante IP codecs for sport, without having to relocate to the separated building where the sport studio is located.

Finally, the RTS intercom frame is connected directly via the MADI card, which is prepared for additional fiber cabling to be used with a redundant connection for utmost reliability. One of the seven Dante expansion cards is a spare, already installed in the Penta 720 mainframe for a swift and seamless transfer in the unlikely case that one of the Dante cards should malfunction.

Here is a simple diagram, showing the high-level details on how the new broadcast audio infrastructure has been configured: 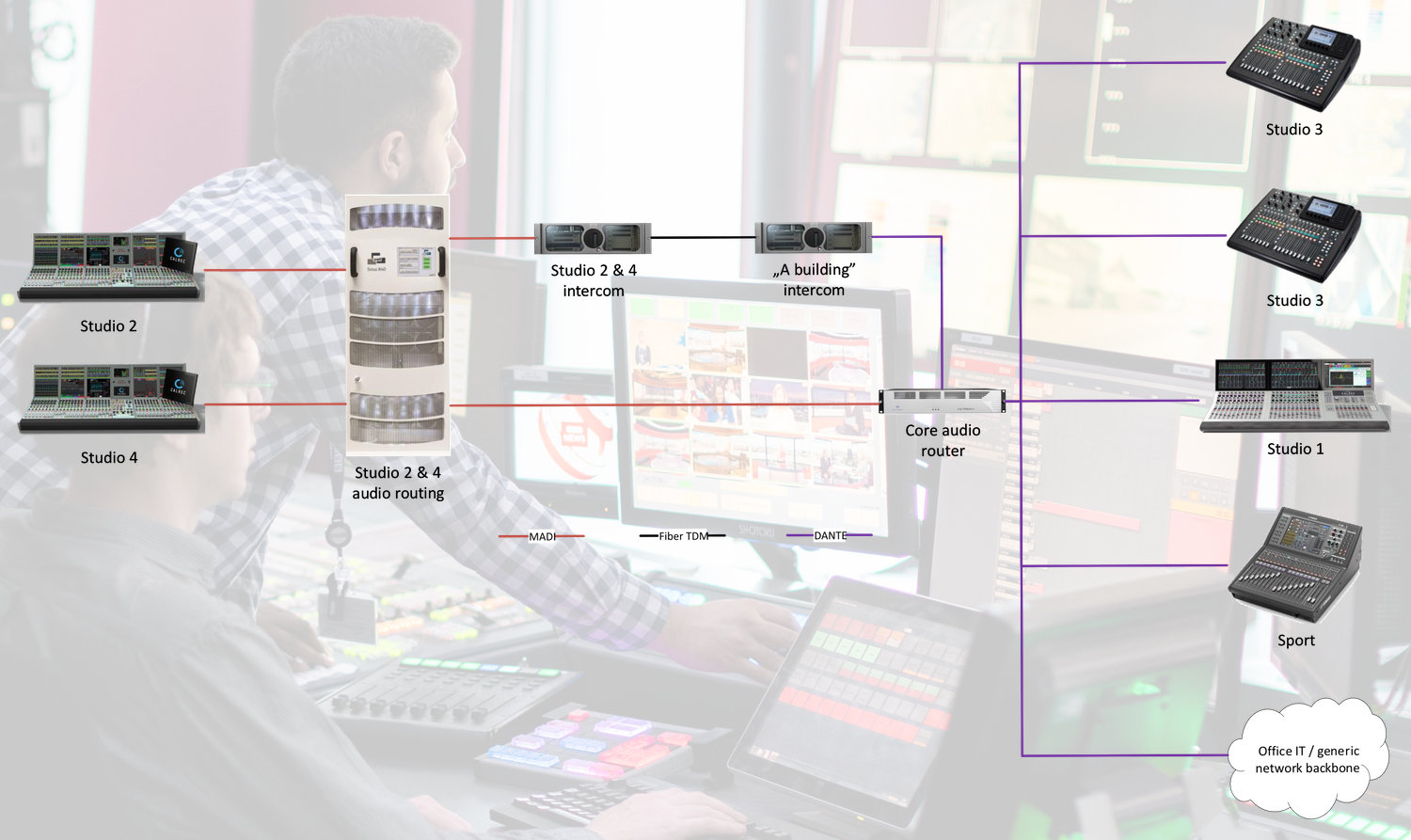